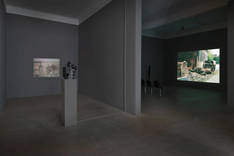 Bard College Berlin, Lecture Hall Platanenstrasse 98a, 13156 Berlin
In this screening and talk, Clemens von Wedemeyer will speak about his methods of working with historical material and in particular the works in his exhibition P.O.V. (Point Of View) at the Neuer Berliner Kunstverein in 2016 and screen works that were presented in the exhibition: Die Pferde des Rittmeisters (The horses of the cavalry captain) (2015); Against the point of view (2016); and Was man nicht sieht (What you Don’t see), 2016. In these works, von Wedemeyer examines the positionality of the subjective camera in war through a non-linear and multi-strategy pictorial analysis of amateur front-line footage shot by Captain Freiherr Harald von Vietinghoff-Riesch during the Second World War.

This open event is part of the dialogue and research of the Making History: Political Storytelling in Contemporary Art Practice class at Bard College Berlin.

Clemens von Wedemeyer, born in 1974 in Göttingen, Germany, currently lives and works in Berlin and holds a professorship for media art at the Academy of Fine Arts Leipzig. The artist and filmmaker studied photography and media at the Fachhochschule Bielefeld and the Academy of Fine Arts Leipzig. Clemens von Wedemeyer participated in group shows such as the 1st Moscow Biennale (2005), the 4th Berlin Biennale (2006), Skulptur Projekte Münster in 2007, the 16th Biennale of Sydney (2008) and dOCUMENTA (13) (2012). He had solo shows among others at MoMA PS1, New York, ARGOS Centre for Art and Media, Brussels, the Barbican Art Centre, London, Frankfurter Kunstverein, Museum of Contemporary Art, Chicago, and Hamburger Kunsthalle. “ESIOD 2015” premiered at the 66. Internationale Filmfestspiele Berlin (Berlinale) in 2016.