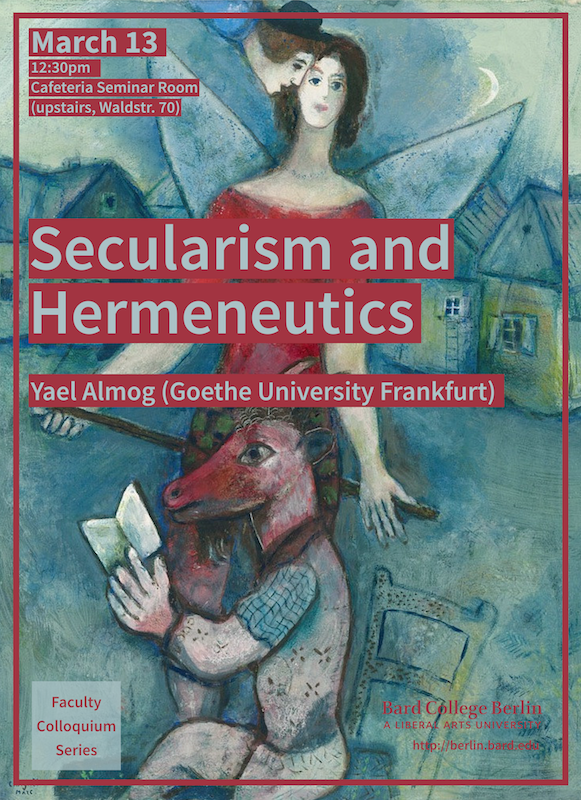 In the late Enlightenment, a new imperative began to inform theories of interpretation: all literary texts should be read in the same way that we read the Bible. However, this assumption concealed a problem—there was no coherent "we" who read the Bible in the same way. This talk will argue that several prominent thinkers of the era, including Johann Gottfried Herder, Immanuel Kant, Georg Wilhelm Friedrich Hegel, and Friedrich Daniel Ernst Schleiermacher, constituted readers as an imaginary "we" around which they could form their theories and practices of interpretation. This conception of interpreters as a universal community established biblical readers as a coherent collective.

The lecture will reveal the tension between textual exegesis and confessional belonging and challenge the modern presumption that interpretation is indifferent to religious concerns.

Yael Almog is a faculty member (Wissenschaftliche Mitarbeiterin) in Theology at the Goethe University Frankfurt. Previously, she was Postdoctoral Researcher of European intellectual history at the Lichtenberg-Kolleg of the Georg-August-Universität Göttingen (2016–18) and a faculty member at the Center for Literary and Cultural Research Berlin (ZfL) (2014–16). Almog’s monograph Secularism and Hermeneutics will be published with the University of Pennsylvania Press in May 2019. Her translation of Johann Gottfried Herder’s Treatise on the Origin of Language is forthcoming, together with her introduction and commentary, with Resling publishers. She has co-edited two collected volumes that discern the cultural echoes of political secularism in literature, academic disciplines, and critical theory. The second volume, Kommentar und Säkularisierung in der Moderne, was published with Fink in 2017.