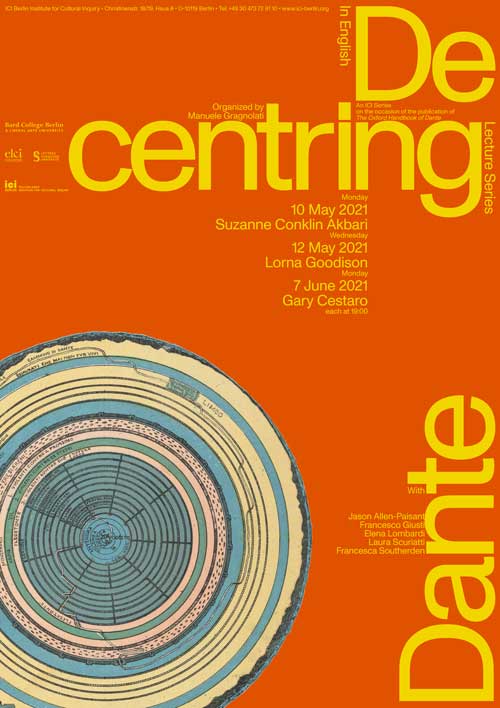 In this talk Jamaican poet Lorna Goodison speaks about her own personal relationship to Dante's Divine Comedy as well as her work translating and transferring his work into a Jamaican vernacular and setting.  She will also be sharing some of her own poems influenced by Dante.

This event is part of the Institute for Cultural Inquiry (ICI)  series "Decentring Dante" celebrating the publication of The Oxford Handbook of Dante, edited by Manuele Gragnolati, Elena Lombardi, and Francesca Southerden (2021) with a series of lectures that suggest ways of reading Dante’s Divine Comedy from a less central position and with a broader, more critical perspective. How can discussions of race in the Middle Ages and the attentiveness to indigenous forms of knowledge preservation help literary scholars to rethink their understanding of ’canonicity’ and the ’canonical‘? On what basis can canonical authors such as Dante, Chaucer, and Christine de Pizan continue to be read today? In what sense and at what cost can Dante inspire other poets? What does he mean, more specifically, to a woman writer and artist in Jamaica? What changes when Dante’s Virgil is read not only as part of the Christian reception of classical authors in the Middle Ages, but also in dialogue with the practices of ancient pedagogy? Does the queer desire informing the Aeneid also flow through Dante’s poem?

Lorna Goodison is a major figure in world literature, she was the Poet Laureate of Jamaica (2017–2020), and in 2019 she was awarded the 2019 Queen’s Gold Medal for Poetry. Goodison has won many other awards for her work, including the Windham-Campbell Literature Prize for Poetry from Yale University, the Commonwealth Poetry Prize, the Musgrave Gold Medal from Jamaica, the Henry Russel Award and the Shirley Verett award for Exceptional Creative Work from the University of Michigan, and one of Canada’s largest literary prizes, the British Columbia National Award for Canadian Non-Fiction for From Harvey River: A Memoir of My Mother and Her People (2007).

This event is co-sponsored by the course "Migration and Exile" led by BCB Professor of Comparative Literature Laura Scuriatti and is part of BCB faculty member Francesco Giusti's course "The Divine Comedy Today". Dr. Scuriatti will also co-moderate the event.

Other events in the series: