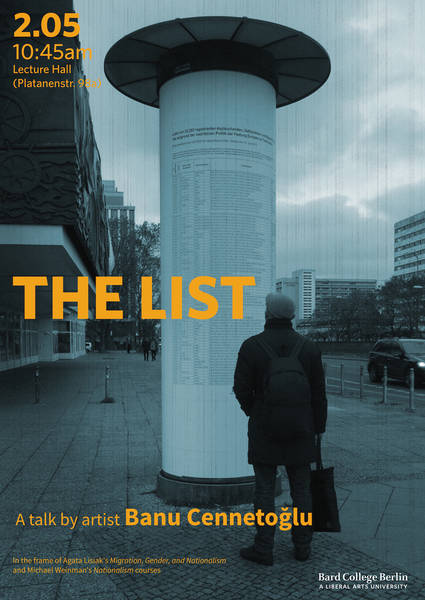 On Wednesday, May 2nd 2018, the courses Migration, Gender, and Nationalism (led by Agata Lisiak) and Nationalism (led by Michael Weinman) will host artist Banu Cennetoğlu for a video guest lecture titled "The List."
Compiled and updated each year by UNITED for Intercultural Action, The List traces information relating to the deaths of more than 33,000 refugees and migrants who have lost their lives within, or on the borders of Europe since 1993. Since 2007, in collaboration with art workers and institutions, Banu Cennetoğlu has facilitated up-to-date and translated versions of The List using public spaces such as billboards, bus stops and newspapers. Co-commissioned and produced by Liverpool Biennial and Chisenhale Gallery, The List will be distributed across public sites, both in print and online, in Liverpool and London during summer 2018.

Banu Cennetoğlu (b. 1970, Ankara, Turkey) lives and works in Istanbul. Cennetoğlu explores the political, social and cultural dimension of the production, representation and distribution of knowledge and asks how this feeds into a society’s collective thinking and becomes part of its ideology. In 2006 she initiated BAS, a project space in Istanbul focusing on the collection and production of artists’ books and printed matter. In 2016 she was a guest at the DAAD Artists-in- Berlin Program.
Recent exhibitions include Hammer Museum, Los Angeles, USA (2018); documenta 14, Athens, Greece and Kassel, Germany (2017); Fondazione Nicola Trussardi, Milan, Italy (2017); 10th Gwangju Biennale, South Korea (2014); Manifesta 8, Murcia, Spain (2010); 53rd Venice Biennale, Italy (2009); 3rd Berlin Biennale, Germany (2008); 1st Athens Biennale, Greece (2007); and 10th Istanbul Biennial, Istanbul (2007).
The lecture is part of the Bard network Nationalism course and will be joined remotely by students and faculty from the American University of Central Asia, the European Humanities University, and Al-Quds Bard.