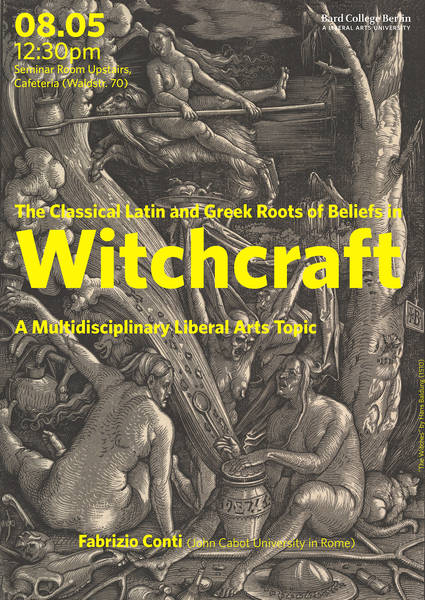 Bard College Berlin Cafeteria
On May 8, 2018 Bard College Berlin is delighted to welcome Dr. Fabrizio Conti, Lecturer in History at the Department of History and Humanities, John Cabot University in Rome, for a lunchtime guest lecture titled "The Classical Latin and Greek Roots of Beliefs in Witchcraft: a Multidisciplinary Liberal Arts Topic."
Conti’s talk will address the multifaceted issue of witch-beliefs, which emerged in Europe in the 15th and 16th centuries, and whose constitutive elements, however, need to be traced back to a composite background of both classical and medieval origin. In particular, Conti’s talk will aim at discussing the literary tradition centered on the bird-women, blood-sucking striges (from which the Italian “streghe” derive), to be found in authors such as the Greek Antoninos Liberalis as well as the Latin Horace, Ovid, and Petronius, and the role this tradition played in the construction of the figure of the witch once it merged into a post-medieval demonic reading of the 10th century legal text known as the canon Episcopi that had spoken (originally in a skeptical way!) of some women with special abilities going about at night along with the goddess Diana. The talk will also aim at illustrating the potentialities of such a topic as a teaching and research field for the liberal arts student to develop critical thinking, a multidisciplinary approach, and problem-based learning in a historical perspective.

Fabrizio Conti earned his PhD in History and Medieval Studies from the Central European University in Budapest (2011). He also earned degrees from the School of the Vatican Secret Archive and the Pontifical Institute for Christian Archeology, both in Rome. After several teaching experiences both in Italy and abroad, and after having taught at the Ohio State University in 2015, he is currently a lecturer in the History and Humanities Department at the John Cabot University in Rome, teaching courses including Introduction to Western Civilization, Medieval History, and the Italian Renaissance. He published a monograph titled Witchcraft, Superstition, and Observant Franciscan Preachers: Pastoral Approach and Intellectual Debate in Renaissance Milan (Brepols, 2015).