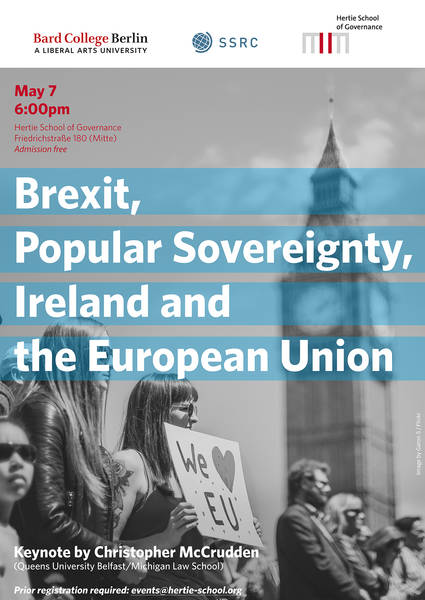 In this lecture, Christopher McCrudden examines the current debate on popular sovereignty and the implications of Brexit for this discussion.

Christopher McCrudden is Professor of Human Rights and Equality Law at Queens University Belfast. He is also William W Cook Global Professor of Law at the University of Michigan Law School, and a practicing barrister-at-law with Blackstone Chambers, London. He was formerly Professor of Human Rights at the University of Oxford, and a Fellow of Lincoln College, Oxford. He was educated at Queen’s University Belfast, Yale University, and Oxford University, where he completed his doctorate. He serves on the editorial boards of several journals, including the Oxford Journal of Legal Studies. In 2011, he was awarded a three-year Leverhulme Major Research Fellowship. During 2014-15 he was a Fellow of the Wissenschaftskolleg zu Berlin, whose Beirat he now chairs. He was awarded an honorary doctorate by Queen’s University in 2006, a certificate of merit by the American Society of International Law in 2008, and a Doctorate of Civil Law by Oxford University in 2017. He was elected a Fellow of the British Academy in 2008, and a Member of the Royal Irish Academy in 2018. His most recent book is Litigating Religions: An Essay on Human Rights, Courts, and Beliefs (Oxford University Press, 2018).

Words of welcome by Başak Çalı (Professor of International Law at the Hertie School of Governance and Director of the Center for Global Public Law at Koç University, Istanbul)

Moderator: Christine Landfried (Professor emerita of Political Science at the University of Hamburg and Senior Fellow at the Hertie School of Governance)