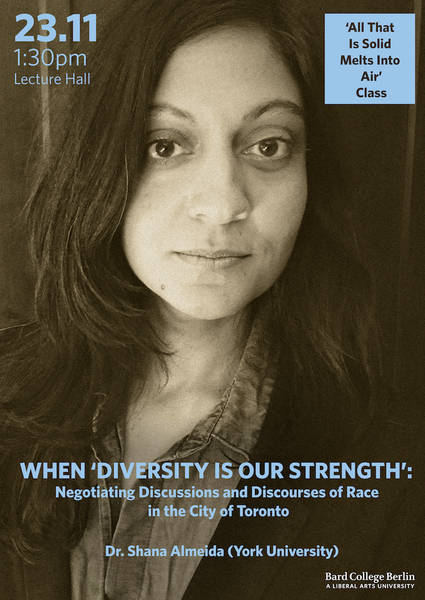 Bard College Berlin Lecture Hall
On Thursday, November 23, 2017, Dr. Shana Almeida from York University, School of Social Work, Toronto will give a guest lecture entitled “When ‘Diversity is Our Strength’: Negotiating Discussions and Discourses of Race in the City of Toronto” in the frame of the course “All That Is Solid Melts Into Air” taught by Prof. Dr. Agata Lisiak.

In 2016, BBC Radio 4 officially declared Toronto, Canada to be the most diverse city on earth. According to BBC reporter Ed Davey, Toronto is most diverse because approximately 51% of Toronto’s population is foreign-born, with over 230 nationalities living there (“WS More or Less: The World’s Most Diverse City”, 2016). Responding to the declaration made by the BBC, Patricia McCarney, Director of Global Cities Institute at the University of Toronto, remarked that Toronto’s top ranking is “proof of Toronto’s welcoming attitude to newcomers”, and to its cultural openness (Ngabo, 2016).

How then do we discuss experiences and realities of racism, in a city that is defined by its post-racial sensibilities?

In this presentation, Dr. Almeida draws on several City of Toronto policy documents to demonstrate how the matrix of diversity discourse re-frames claims of racism, making racial Others articulate(d) subjects only to the extent that diversity is reiterated, reproduced and cited by them, and through them. She engages with an understanding of diversity as performative in order to trace and make visible how historical and racial norms become perpetually linked to raced bodies, through texts and speech acts, in order to maintain the ‘diverse’ City of Toronto and its reputation for inclusion on the world stage. In an interesting twist, she also shows how diversity discourse in the City of Toronto both rejects and requires race, in order to reproduce itself.

Dr. Shana Almeida is a scholar, researcher, and activist in Toronto, Ontario, Canada. Her research and teaching contributions are informed by over eight years of work experience in the municipal government of Toronto, Canada, as Special Advisor to Toronto City Councillor Olivia Chow, and as Chief of Staff to Toronto City Councillor Gord Perks. During her time at the City, Dr. Almeida spearheaded several City-wide policy initiatives, especially in the areas of anti-racism, immigration, employment, recreation, public health, poverty, and housing.
Dr. Almeida completed her Ph.D. in the School of Social Work at York University in Toronto (2016). Her doctoral thesis, an exploration of how race is reproduced and organized through “diversity” discourse in the City of Toronto, provides the foundation for her forthcoming book Toronto the Good? Negotiating Race and Belonging in the Diverse City, with University of Toronto Press. This book represents a significant departure from popular understandings and depictions of diversity and the City of Toronto in that it uniquely attends to the question of what diversity does in and for the City, as a discourse and as a mechanism of power.
Dr. Almeida has been invited to share her work locally and internationally, including in Toronto, Berlin, Frankfurt, London, and Grahamstown, South Africa.