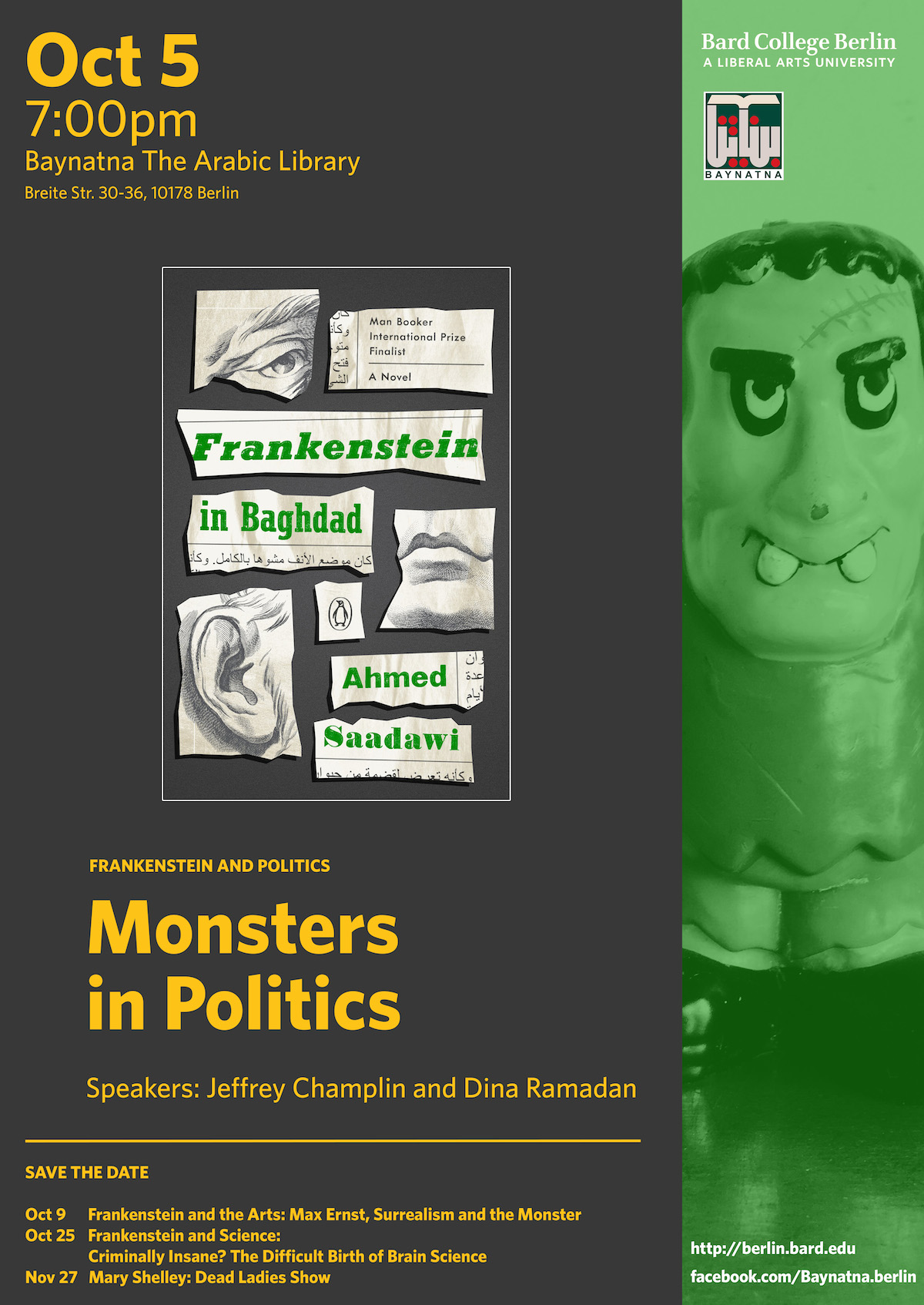 Bard College Berlin and Baynatna The Arabic Library invite you on Friday, October 5, 2018 to another exciting event in the Frankenstein / Eine Uni ein Buch Fall 2018 program.

The monster in Mary Shelley’s Frankenstein has long served as a symbol for unruly political forces, from the working class in the 19th century, to Obamacare, genetic engineering, and Trump in recent decades. These varied projections take on an ambivalent meaning. According to one logic, since the monster is our fault, we need to take all steps to track it down and destroy it. Another approach suggests that instead of turning to violence we should recognize our impact on the world and more carefully account for the apparently irrational exclusions we produce. After all, in the novel the creature emerges as a sympathetic creature who asks for an ethical hearing.

In the context of the Middle East in the 2000s, Frankenstein’s monster became a powerful symbol of agents of U.S. foreign policy who later took their own threatening path. After reviewing the general Frankenstein dynamic in political discourse, this panel zooms in on the recent novel Frankenstein in Baghdad by Ahmed Saadawi, which takes the creature to the Iraq war and weaves a fascinating course through projections of revenge, redemption, and utopian political representation: “Because I’m made up of body parts of people from diverse backgrounds — ethnicities, tribes, races and social classes — I represent the impossible mix that never was achieved in the past. I’m the first true Iraqi citizen.”

Jeffrey Champlin teaches literature and political theory at the Barenboim-Said Academy and Bard College Berlin. He has also taught at Middlebury College and New York University, and was most recently the program head of Literature and Society at Bard College's partnership with Al-Quds University in Palestine. His book, The Making of a Terrorist: On Classic German Rogues draws on the work of Hannah Arendt to read violent scenes in Goethe, Schiller, and Kleist in the context of the social contract tradition (Northwestern UP, 2015). He has also published widely on authors including Friedrich Kittler, Mary Shelley, and Sophocles.

Dina A. Ramadan is Assistant Professor of Arabic at Bard College. She received her PhD from the Department of Middle Eastern, South Asian, and African Studies at Columbia University. Her research focuses on modern and contemporary cultural production in Egypt, and she is currently completing a manuscript entitled An Education of Taste: Art, Aesthetics, and Subject Formation in Colonial Egypt. She is a senior editor of Arab Studies Journal and a founding member of the Association for Modern and Contemporary Art of the Arab World, Iran, and Turkey (AMCA). She is visiting professor at Bard College Berlin in fall 2018 and an affiliated EUME fellow at the Berlin-based Forum Transregionale Studien.