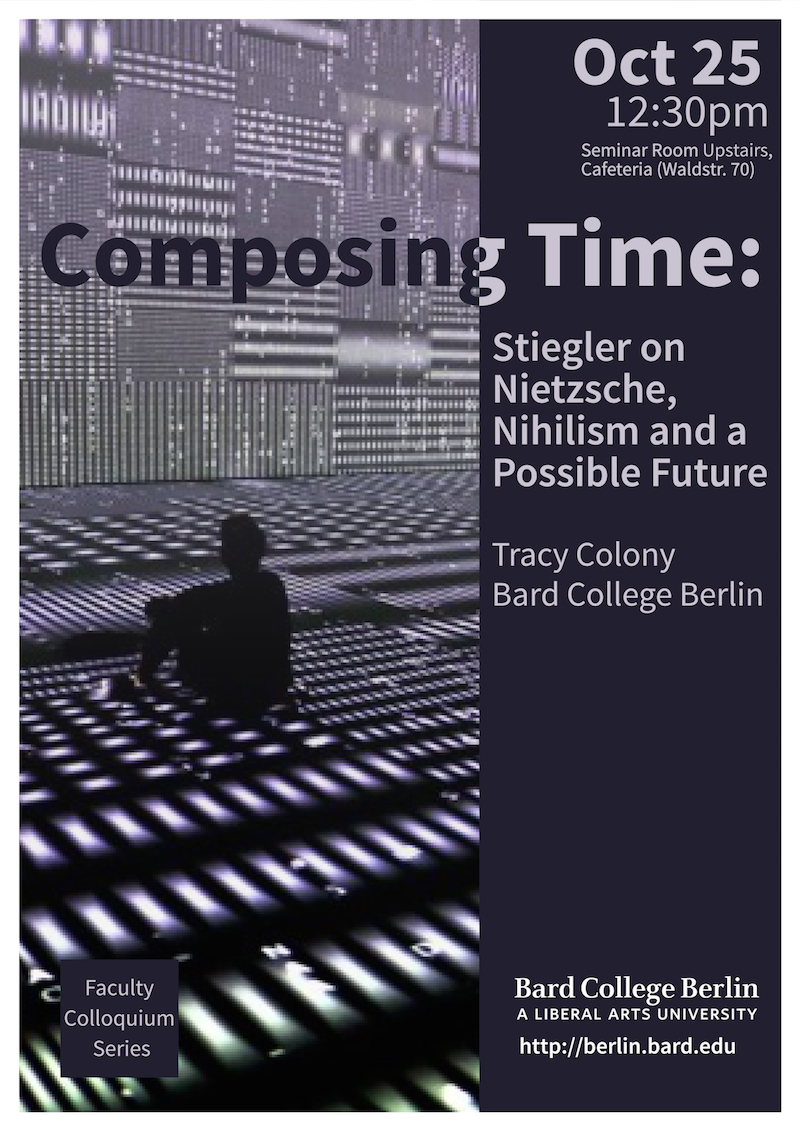 Bernard Stiegler is perhaps the most important philosopher today working on the theme of originary technicity and its implications for diagnosing and responding to our contemporary situation. Stiegler’s critical dialogues with Simondon, Heidegger and Derrida are crucial for understanding his own philosophy and have been well documented in the growing reception of his work. However, there is to date not one extended treatment on Stiegler’s relation to Nietzsche.

In this talk, Colony will argue that Nietzsche, although less often mentioned, can also be seen as one of Stiegler’s key philosophical interlocutors from the first volume of Technics and Time up to his most recent work. The basis for Stiegler’s engagement with Nietzsche is his understanding of Nietzsche as a tragic thinker. Beyond the merely oppositional thinking of metaphysics that extends from Plato to Heidegger, Stiegler can be seen to accord Nietzsche a more originary insight into the necessary composition of apparently oppositional tendencies. Accordingly, Nietzsche’s genealogy of guilt is able to articulate an originary default prior to the metaphysical and Christian understandings of an original fall. Moreover, this understanding of an originary sense of difference is important for tracing Stiegler’s engagement with Deleuze’s reading of Nietzsche.

Colony will look at Nietzsche in Stiegler’s Technics and Time series, his 2004 text The Decadence of Industrial Democracies, and the presence of Nietzsche in Stiegler’s most recent work. Although often overlooked Stiegler can be seen to be an important reader of Nietzsche. This reading can be seen to focus on Nietzsche as a philosopher of difference. This insight is the basis for his understanding of Nietzsche as able to diagnose the reactive tendencies at work in society today, and also, as a resource for thinking a politics of difference and the possibility of a different future.

Tracy Colony received his doctorate in Philosophy in 2001 from Leuven (Belgium) and has been teaching at Bard College Berlin since 2003.