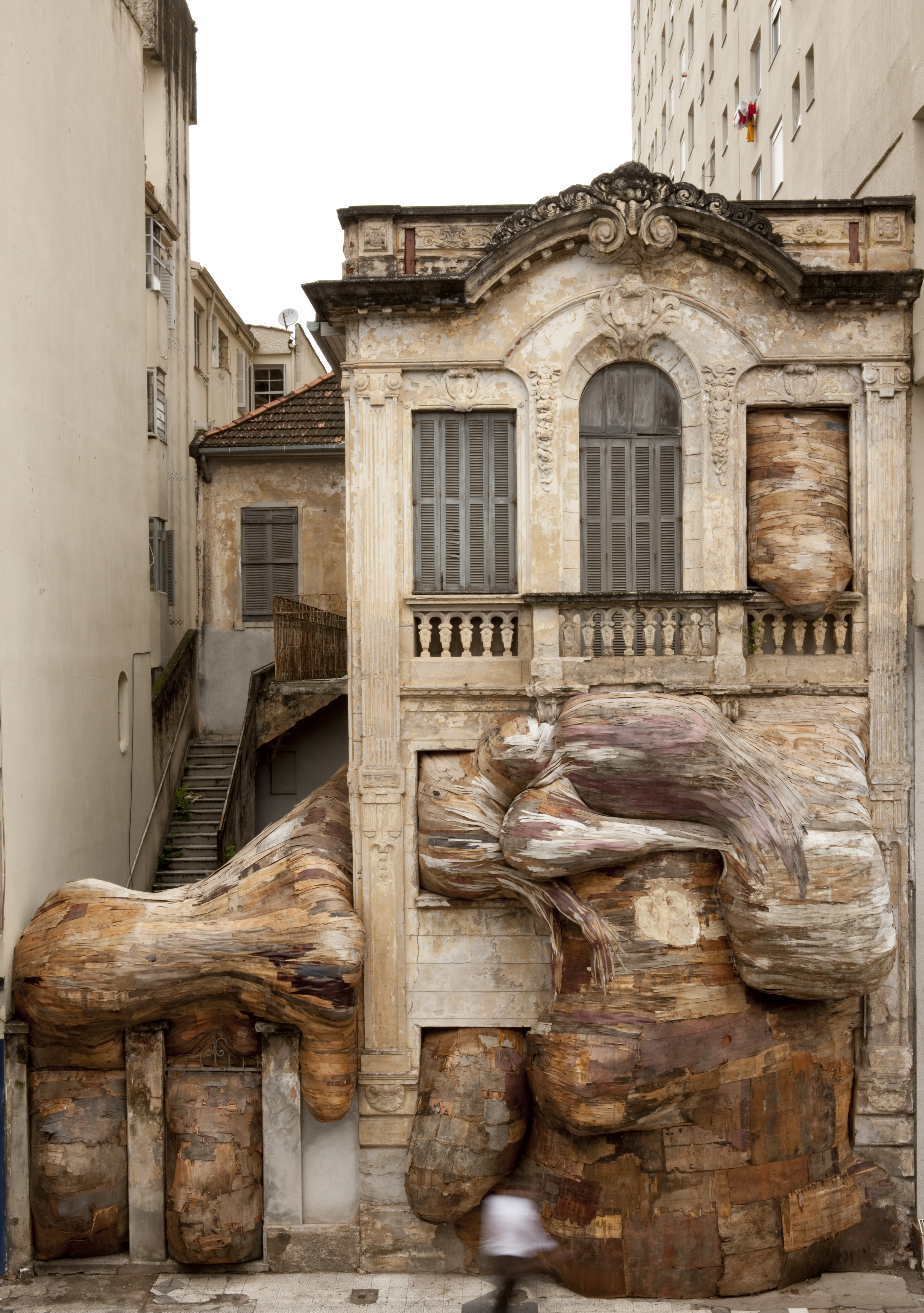 
Presented as wall reliefs, free-standing pieces or walk-in environments, the works of Henrique Oliveira are often perceived as hybrid forms or organic structures that merge with the architecture or with ordinary objects.

Meticulously crafted by the artist and his assistants, these volumes convert the natural patina of used materials such as plywood, metal, foam and tree branches into a kind of “taxidermied” double of today’s urban environment, suggesting a strange and new kind of life.

Proposing a counterpoint to the flux of virtual images that dominates our time, the strong materiality of Oliveira's pieces is an invitation to see, not just with the eyes, but with the whole body. Confronted with these objects and situations, the spectator is driven into an experience that destabilizes codes of visual perception such as space, surface and consistency. Animal and vegetable, painting and sculpture, among other classifying systems, are defied through the usage of residual elements of everyday life.

Henrique Oliveira was born in Ourinhos, Brazil in 1973. He graduated with a Master's in visual arts from São Paulo University, in the city of São Paulo, where he lives and works. Among his recent solo exhibitions are shows at Museu de Arte Contemporânea - São Paulo, Brazil (2014) and Palais de Tokyo - Paris, France (2013). Participation in group shows includes “Object in Flux” at the Boston Museum of Fine Arts (2015); “Brasiliana - Installation from 1960 to the present” at the Schirn Kunsthalle - Frankfurt, Germany (2013); “Sculpture is Everything” at the Queensland Gallery of Modern Art - Brisbane, Australia (2012); “Artists in Dialogue 2: Sandile Zulu and Henrique Oliveira” at the Smithsonian National Museum of African Art - Washington DC, USA (2011); and the 29th Bienal de São Paulo  - São Paulo, Brazil (2010).

The artist talk takes place in connection to the course Contemporary Materials and Techniques taught by Director of Studio Arts John von Bergen.

BVG Directions: Bard College Berlin's Factory is in Niederschönhausen, a 12-minute tram ride from the “Pankow” S/U-Bahn station. Take the M1 tram towards the destination “Rosenthal Nord” (not "Schillerstrasse") and exit at “Friedrich-Engels-Str. / Eichenstrasse”. Bard College Berlin’s Factory is 2 blocks away on the right side with a large red banner in front.