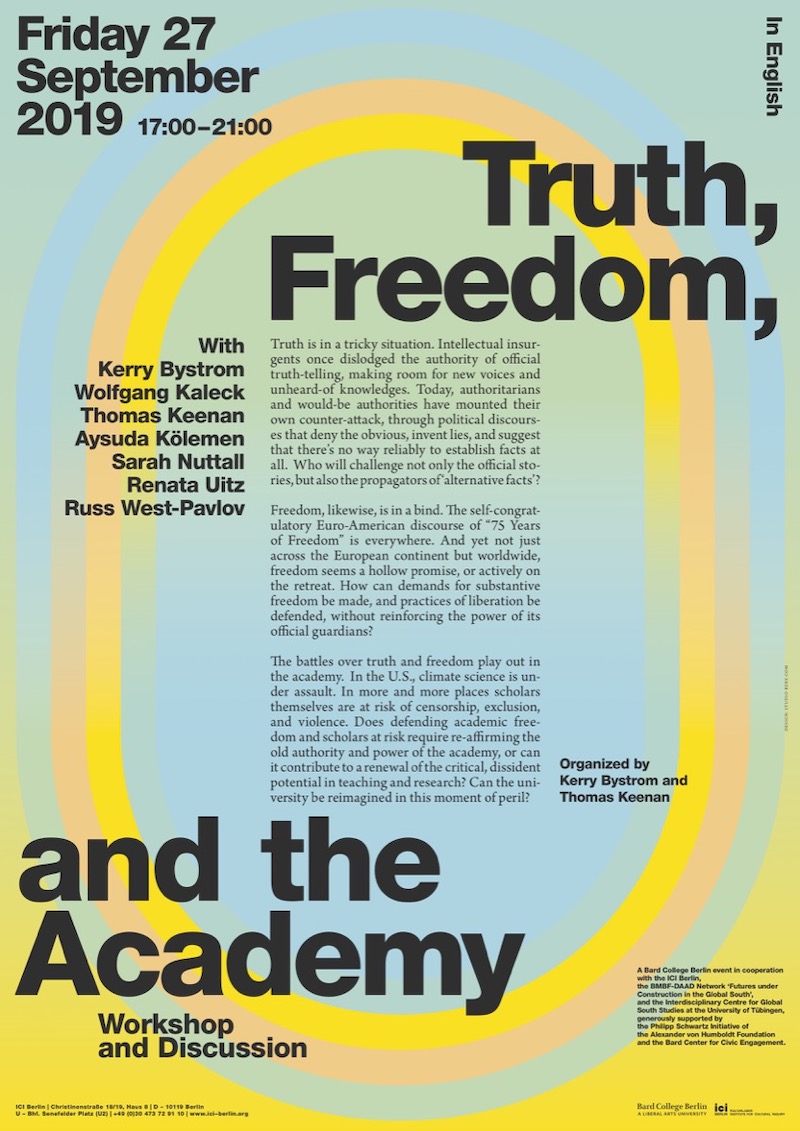 Truth, Freedom, and the Academy

A Bard College Berlin event in cooperation with the ICI Berlin, the BMBF-DAAD Network ‘Futures under Construction in the Global South’, and the Interdisciplinary Centre for Global South Studies at the University of Tübingen, generously supported by the Philipp Schwartz Initiative of the Alexander von Humboldt Foundation and the Bard Center for Civic Engagement.

Truth is in a tricky situation. For the past few decades, critics and scholars influenced by post-structuralism and post-colonialism have waged a sustained campaign to challenge the authority of official and institutional modes of discovering and claiming truth. New truths and previously unheard-of knowledges have emerged from all sides, and our world is richer for them. Today, authoritarians and would-be authorities have themselves launched an assault on truth, and our political landscapes are filled with discourses that deny the obvious, imagine conspiracies, spread lies and rumours, and suggest that there isn’t even any way to reliably establish facts in the first place. Critical and insurgent modes of truth production, ones that contest not only the official stories but also propagators of ‘alternative facts’, are more necessary than ever.

Freedom, likewise, is in a bind. Seventy-five years after World War II and the defeat of fascism, and thirty years since the end of the Cold War, the fall of the Berlin wall, and the end of apartheid, the self-congratulatory Euro-American discourse of ‘75 Years of Freedom’ is largely uncontested. Talk of freedom legitimizes all sorts of enforcement actions. And yet not just across the European continent but worldwide, freedom seems to have had its promises hollowed out or to actively be on the retreat. How can demands for substantive freedom be materialized, practices of liberation be defended, and claims for new freedoms be articulated without reinforcing the power of its official guardians?

The academy is one of the most contested battlegrounds in this double conflict. In the US, the scholarship of climate change, which is not just one example among others, is under assault. In more and more places scholars themselves are at risk of censorship, violence, exclusion, and repression. The university is at once one of the oldest and most entrenched institutions controlling truth, and the site of a deep commitment to an ongoing practice of free and unconstrained reflection, contestation, and intellectual upheaval. Does defending academic freedom and scholars at risk necessarily imply re-affirming the old authority and power of the academy, or can it contribute to a renewal of the critical, skeptical, dissident potential in teaching and research? What new ideas and practices of education and knowledge production, or understandings of the university itself, might be called for?