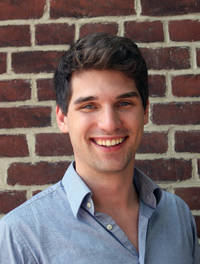 Germany
Attended: Academy Year 2006-2007
Currently CEO of HelloBetter
I originally come from Germany and graduated from the 2006/2007 Academy Year at ECLA*. I hold a Dual-Master's in Public Administration from Columbia University and the Hertie School of Governance in Berlin, as well as a B.A. in International Relations from the Technische Universität (TU) Dresden. In 2012, I wrote a book in collaboration with Yehuda Elkana on the future of the university in the digital age. In addition to that, I worked on the "New Digital Society" project in 2010/2011 as an associate of the "Stiftung Neue Verantwortung," and was also one of the initiators of the "Causa Guttenberg" blog. Until 2017, I was the co-founder and Chief Executive Officer (CEO) of the online education start-up iversity with offices in Bernau and Berlin.

I am currently working on a new venture in the digital mental health care space: HelloBetter. Founded as a university spin-off in 2015 (under the name GET.ON Institut), HelloBetter is one of the leading providers of online psychological health trainings in German-speaking countries. I joined in January 2019 to scale the business, and in January 2020 I was appointed CEO.

My time at ECLA was a somewhat monastic experience. It was rather small and out of this world, but in a good way. The college was full of interesting and diverse groups of people. Certainly, one of the strengths of the program was that we had around forty students from twenty countries. We also had students from countries you wouldn't necessarily otherwise have international students from. In that respect, it was different from other institutions. The approach of team-teaching and the value-based education were particularly interesting. It was a special kind of experience… it's rather hard to summarize the value of a liberal arts education in a sentence. It offers you the opportunity to engage some of the big questions in life. As a person, and as a member of society, you do encounter these questions time and again, throughout the rest of your life. You think through these eternal questions against the backdrop of your life experience and learn about that of others past and present, real and imaginary. These experiences help when it comes to making value judgments, assessing the right course of action or choosing a path in life. They help you to contextualize, to see the world through someone else's eyes and find your own way of relating to different perspectives. It is crucially important for society in general as well as for all of us as individuals that there is no such thing as knowledge as such – knowledge that just exists in abstract as objective truth. It always has to be understood in a context and that is something that the liberal arts help you appreciate.

The ECLA experience very much influenced my future academic development. The interest in education had been there before: even though I had just graduated with my B.A. degree, I was still checking out online what kind of new Bachelor programs were coming up, and kept track of the university landscape in general. Yet during my first term at ECLA, we read The Republic, which, in a way, is all about education and it had me hooked. At Hertie and Columbia I continued to study political theory and philosophy with a special emphasis on education. This in turn influenced my career choice and hence it is no coincidence that I'm building an education, rather than a food delivery or other ecommerce startup.

*ECLA was the historical name of Bard College Berlin until November 2013.