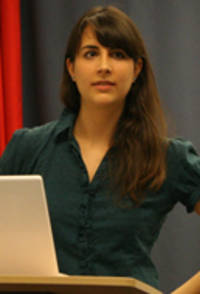 USA
Attended: Project Year 2008/09
Currently: Assistant Professor of History, Lake Forest College, Illinois, USA
When I explain what my time at the European College of Liberal Arts (ECLA*, now Bard College Berlin) was like to friends in the States, I usually say "it's what a liberal arts college should be like." When I attended, the college was certainly smaller than even "small" liberal arts colleges in the States, it didn't have a typical array of majors and concentrations, but from day one, it was evident to me that it took the idea of liberal arts very seriously. Most impressively, I believe, was that it encouraged continued self-reflection about the form and purpose of education. Aided by the small size and the young age of the program, Bard College Berlin is an institution in which every individual matters and has a great deal of influence in shaping the learning environment. During my time here, self-reflection was not idle talk; it had immediate effects on the school community. I am grateful for the opportunity I had to participate in this close-knit intellectual community, surrounded by students and faculty engaging with each other in class and at meal-times.

After graduating from college in the United States, I decided to enroll in ECLA's Project Year, which I found to be a great combination of regular seminars and independent research. For me, the seminars were a way to explore new areas of literature, philosophy, and history that I had not had a chance to in college, as well as learn from my classmates and professors. The independent tutorial structure of the PY program gave me the flexibility to pursue my own interests as they morphed through the year. The faculty I worked with always had my own interests and intellectual growth at heart. Being in the vibrant city of Berlin, encouraged through college facilitated trips and transportation/museum passes, was also an incredible boon, and dovetailed with my own interest in German history and the German language. For me, ECLA was a time of reflection, growth, and exploration, and I would wholeheartedly encourage anyone who is intellectually curious to become part of the community of Bard College Berlin.