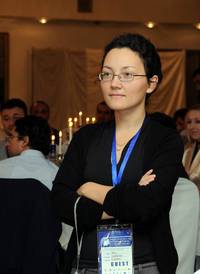 Russia
Attended: Academy Year 2005/2006
Currently: Research Analyst at the European Stability Initiative
The year at ECLA* was a very special time for me. I had just graduated from my university in Russia (I had majored in Economics and Public Administration) and wanted to take some time off and study something completely different before deciding what to do next. The idea of immersing myself in the study of philosophy, art and literature was incredibly appealing. When else would I be able to devote an entire year to such seemingly "impractical" but intellectually gratifying pursuits? Looking back, there are so many things I enjoyed at ECLA: having a nurturing environment where I was free to develop my interests, attending small-sized classes with a low student-to-faculty ratio, building lasting friendships, discovering Berlin and all the great things this city has to offer, traveling visa-free in Europe… I loved how saturated with new experiences and discoveries my life at ECLA was. I also enjoyed being part of the tight-knit, diverse community.

ECLA has reinforced my interest in art and literature (in particular, I became fascinated with modern art, something I had known very little about before). I try to keep art and culture part of my everyday life – I go to a lot of concerts and exhibitions, take piano lessons, and am thinking of taking free online courses in the humanities. Professionally, as a political analyst focusing on the EU's neighbouring countries, I am often reminded of the impact of certain ideas on the way policies are made and identities are shaped. Finally, I fell in love with Berlin during my year at the college. After completing a Master's in International Relations at the Central European University in Budapest, I came back to Berlin and have been living here ever since. I did a Master's in Public Policy at the Hertie School of Governance, and, since 2009, I have been working as a research analyst at the European Stability Initiative, a Berlin-based think tank, focusing on the South Caucasus and Moldova. In addition to doing research and writing reports, I also helped make a documentary film on Moldova in the summer of 2012.

My advice to current or prospective students: Bard College Berlin is a great place for being young, exploring your intellectual interests and creating great memories. Make the most of your time here!