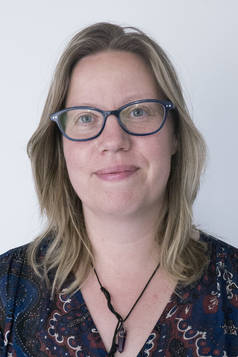 Yvonne Toepfer received her PhD in Comparative Literature from the University of Oregon in 2014 and was a Postdoctoral Teaching Fellow there until 2015. Before joining Bard College Berlin, she was a Visiting Assistant Professor of German at Montana State University in Bozeman. She has taught a variety of lower and upper division courses in German language (A1-C1), world and German literature, film, literary theory, as well as research/capstone both in English and German, and both in the traditional and online learning environment at Montana State University and the University of Oregon. Between 2015-2017 she actively served as the German Faculty adviser for the German Klub at MSU. She also holds a B.A. degree in Psychology from the University of Oregon (2006) and a transfer certificate (2003) from Foothill College, Los Altos Hills in California.

Her research interests have extended to the art, philosophy, literature and their intersections, resulting in a comparative and interactive approach in her teaching, and include early 19th century German literature, fairy tale studies, folklore, narrative studies, feminist and gender studies, and film studies (e.g. afterlife of the literary and traditional tales in the 20th and 21st century and the modern representation of the villain character as a reiteration of the Byronic hero) and also explore the concepts of the sublime, the fantastic and absolute chaos. She has presented on these topics in several public forums (e.g. at both American Comparative Literature Association and the German Studies Association conferences).