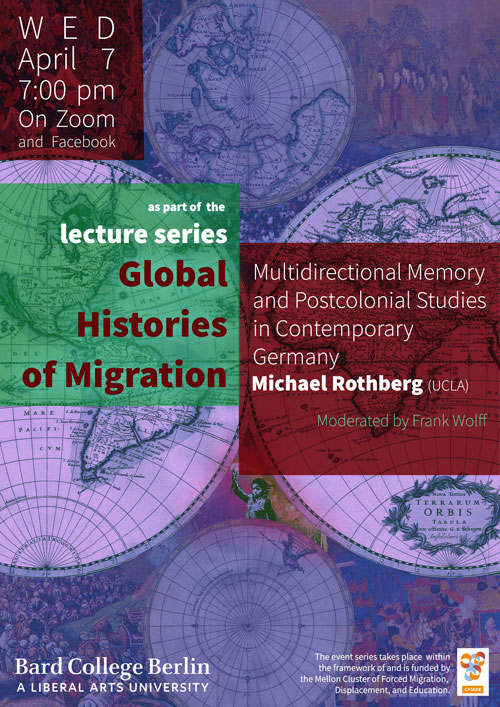 In this talk, Michael Rothberg will introduce his book Multidirectional Memory: Remembering the Holocaust in the Age of Decolonization, which has just been translated into German. The translation appears in a moment of intensive debate in the German public sphere about colonial legacies, postcolonial studies, the relation between antisemitism and racism, and the place of the Holocaust in Germany’s memorial landscape. In addition to providing an overview of the book’s central arguments, Rothberg will reflect on how the concept of multidirectional memory can help illuminate and address the current controversies.

Michael Rothberg is the 1939 Society Samuel Goetz Chair in Holocaust Studies and Professor of English and Comparative Literature at the University of California, Los Angeles. His latest book is The Implicated Subject: Beyond Victims and Perpetrators (2019), published by Stanford University Press. His book Multidirectional Memory: Remembering the Holocaust in the Age of Decolonization (Stanford UP, 2009) has just appeared in German as Multidirektionale Erinnerung (Metropol Verlag, 2021). He is also the author of Traumatic Realism: The Demands of Holocaust Representation (Minnesota UP, 2000) and co-editor with Neil Levi of The Holocaust: Theoretical Readings (UBC Press, 2003). With Yasemin Yildiz, he is completing Memory Citizenship: Migrant Archives of Holocaust Remembrance.

Following the talk, Michael Rothberg will engage in a conversation with BCB faculty member Frank Wolff and a discussion with the audience.


Further events in the series: