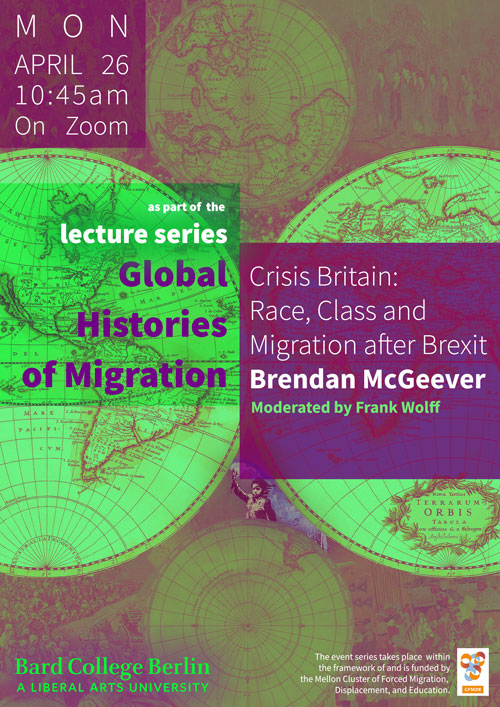 This talk offers a conjunctural analysis of the financial and political crisis that is Brexit.  It does so by charting a longer story of working-class and anti-racist defeat through the 1970s and into the early twenty first century. By tracing the racialization of migration over the longue dureé and the politicization of Englishness, the talk identifies the present moment as an emergency, and suggests some possible resources of hope.

Brendan McGeever received his PhD from Glasgow University in 2015 and is Lecturer in Sociology at the Department of Psychosocial Studies and the Pears Institute at Birkbeck College, London. Specialized in the study of racism and anti-racism he is particularly interested in their relationship and in exploring how both can be addressed within the wider sociology of racism and ethnicity studies. His book  Antisemitism and the Russian Revolution (Cambridge University Press, 2019) was awarded the 2020 Reginald Zelnik Book Prize for History, and an 'Honourable Mention' for the W. Bruce Lincoln Prize. In 2019, Brendan was selected as a 'New Generation Thinker' by the BBC and AHRC.

This event is moderated by BCB faculty Frank Wolff

Further events in the series: