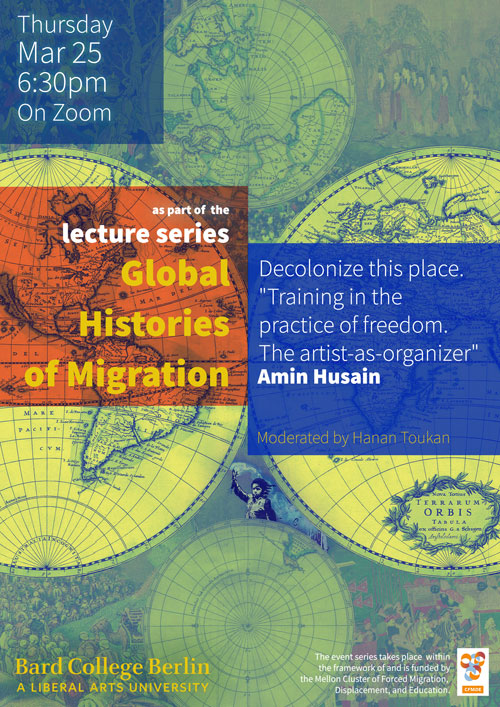 Amin Husain – Decolonize this place. "Training in the practice of freedom. The artist-as-organizer"

This talk sketches out the possibility of an artistic, decolonial practice in which the artist's work does not simply add an artistic flair to a campaign, but rather theory and research, action and aesthetics, debriefing and analysis — this entire dialectical process — is the art practice.

Amin Husain has a B.A. in Philosophy and Political Science, a J.D. from Indiana University School of Law, and an LL.M. from Columbia Law School. He practiced law for five years before transitioning to art, studying at the School of the International Center of Photography and Whitney Independent Study Program.  Amin Husain with Nitasha Dhillon are MTL, a collaboration that joins research, aesthetics, organizing and action in practice. Nitasha Dhillon and Amin Husain are co-founders of Anemones and Tidal: Occupy Theory, Occupy Strategy, both movement-generated theory magazines; Global Ultra Luxury Faction, known as the direct-action wing of Gulf Labor Coalition; Direct Action Front for Palestine; and, most recently, Decolonize This Place, an action-oriented movement and decolonial formation in New York City and beyond. Currently, they are directing and producing Unsettling, an experimental documentary film about land, life, and liberation in occupied Palestine.


Further events in the series: