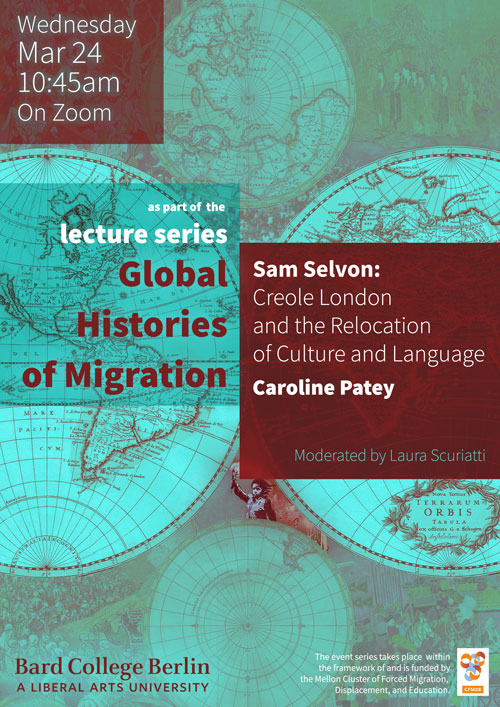 Caroline Patey – Sam Selvon: Creole London and the Relocation of Culture and Language

Sam Selvon's Lonely Londoners (1956) is a seminal novel in many ways. Politically, it charts the woes, hopes and sometimes joys of migration, explores the deliberate construction of difference and conflict which gained momentum in the fifties and exposes the homelessness and the fragility of communities. But Selvon also narrates the human and aesthetic treasures of creolization and hyphenization and the virtues of cultural ‘contamination’. The talk will concentrate on three different - but interrelated - aspects of the novel:
Caroline Patey studied English and Comparative literature in Paris (Paris III), Dublin UCD and the Università degli Studi, Milan, where she was chair professor of  English literature until 2018. Her interests and fields of research include Renaissance literature, late Victorian culture and modernism with a special focus on intermediality, the intersection between museum and literature and the cross-border circulation of cultures and aesthetic forms.

This event is moderated by BCB Professor for Comparative Literature Laura Scuriatti.

Further events in the series:


The event series takes place  within the framework of and is funded by the Mellon Cluster of Forced Migration, Displacement, and Education.