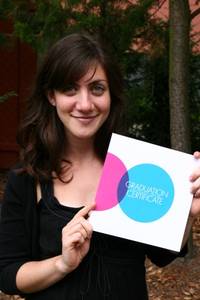 Argentina
Attended: AY '08/09, ISU '09
Currently: Assistant Professor at Lake Forest College, Chicago
ECLA* has offered a great intellectual community: from the deans and professors, to the staff and students, we all formed a tight-knit community where students' interests were fostered and their critical viewpoints challenged. While at ECLA, the interdisciplinary curriculum allowed me to explore a wide array of classes, from Film Studies and World Literature, to Philosophy and Art History.

In 2010, I was invited back to ECLA to help coordinate that year's Annual Conference, after a proposal I had put forward on the topic of translation. It was a fascinating week-long symposium with important international lecturers discussing the role of the translator and the possibility of intercultural awareness through translation.

The following year, I started my PhD in Literature and Cultural Studies at Georgetown University, from which I graduated in 2016. My dissertation, entitled The Translator's Fictions: the Translator as Protagonist in Contemporary Spanish and Latin American Literature, explored the recent upsurge in the representation of translation and the task of the translator in literature, and was very much inspired by my work in Berlin. I am currently Assistant Professor of Latin American Literature and Translation in the Modern Languages & Literatures Department at Lake Forest College near Chicago.