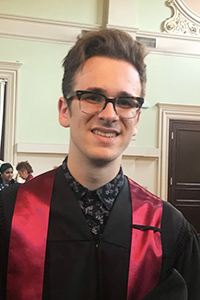 I am from New Hampshire, in the United States. When I first arrived at Bard College Berlin I actually came as a “Begin in Berlin” student who would move to studying at Bard College in New York after my year abroad. However, after my year at BCB I made the decision to stay in Berlin for my degree. I was enrolled in the Humanities, the Arts, and Social Thought BA program and my concentration was Ethics & Politics. I graduated in May 2018.

There were many parts of my BCB experience that were indispensable to me, but to just choose two I would have to say that the international environment and the senior project were particularly important and formative for me.

You meet people from all over the world that bring lots of different value systems and moral frameworks to the table with them, which is particularly interesting to someone who studies politics, because you have people with different perspectives that you don’t necessarily consider when you’re coming from a different country. I think that in a classroom with students that are all American it can become very homogenous because they are all coming from a similar background. This is not the case at Bard College Berlin.

Secondly, writing the senior project was a very intensive and important experience for me during my time at BCB. I worked with Professor Catherine Toal on a thesis called “Describing the Working Class: From Fiction to Social Theory” and I was able to spend the year reading and deeply engaging with the writers Didier Eribon, Édouard Louis, and Annie Ernaux, as well as with the theorist Pierre Bourdieu. All of these thinkers and writers have had a large impact in how I see the world and access politics and social problems. The process of actually doing the research, reading, and writing for this project was at times strenuous, but it is the educational experience that I value most from my time at BCB. It was also my work on this project that made me confident in my choice to study French literature as a Master’s student.

It would be easy here to talk about the core curriculum that structures our education here, but instead I think I’ll talk about one of the electives that has influenced my thinking to a large degree. During the second semester of my second year, I had the opportunity to take a course called Recognition taught by Katalin Makkai. In it, we were led through selections that constituted an overview of intellectual thought on recognition theory, and how we as human beings fundamentally understand, relate to, and recognize each other and ourselves. For the first half of the course we read the classics, working our way through Rousseau, Kant, Fichte, Hegel, and the French existentialists; Sartre, Beauvoir, Frantz Fanon. Then, after our spring break, we took what we learned and applied it to more contemporary thinkers on recognition politics; these included people like Nancy Fraser, K. Anthony Appiah, Charles Taylor, among others. This course had a strong influence on me because of the way it insisted on relating philosophical questions to the ‘real’ and messy world of politics, and more precisely, that space of what is often pejoratively called identity politics. Not only have I continued to engage on a deeper level with some of the thinkers we explored in this class, but I’ve also continued to think constantly about how philosophical ideas can be applied to lived social experiences, rather than being limited to academic seminars.

Bard College Berlin helped me gain the confidence to think and speak for myself. I ask myself what I value and what I don’t value, instead of being a victim of popular opinion.

I’m fairly certain that I would like to continue studying and then to work in the field of education, whether that means teaching at high school level, or studying longer and teaching at the university level. I feel that the kind of broad liberal arts education that I received at Bard College Berlin has given me an overview of the many different fields in the humanities and social sciences, as well as provided me with the theoretical and linguistic knowledge I need to continue my education.

When I decided to stay at BCB after my first year, one of my major goals was to reach high proficiency in German and French, along with my other studies. Thanks to the wonderful language professors at BCB as well as having the opportunity to do an Erasmus exchange year at Sciences Po Paris, I was able to achieve that goal. So not only did I read many amazing texts and meet many different people from around the world, but I also left the university with two languages that I will hopefully practice and maintain for the rest of my life.

Where you now and what are you doing?

This fall I will begin a European Masters of French and Francophone Studies (Euromaster für Französische und Frankophone Studien) at the Humboldt-Universität zu Berlin. Much of the program is taught in German as well as French, so for me, as a native English speaker, it is a way to continue my study of both of these languages and cultures.

Make sure to come and visit the campus, but also keep in mind that after the first year or so, the greater Berlin community will be where you spend most of your time. So, make sure to try and get in touch with not only newer students about campus life and adjusting to BCB, but also with older students and how they like living in Berlin. There are some students on this page that are more than willing to respond to emails with any questions you may have.